4th February 2020
The full line up at Joe Longthorne Theatre, North Pier, Blackpool is revealed. It promises to be a true celebration of a glittering career. ... 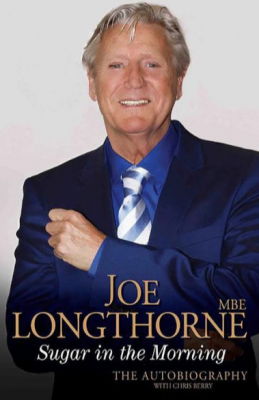 Joe’s best selling and highly acclaimed autobiography ‘Sugar In The Morning’ originally published in 2015 for his 60th birthday is now available both in paperback and as an ebook. Highly recommended for fans old and new, it’s a great read. This version is available at all Joe’s concerts, online for next day delivery worldwide at Joe’s online store www.tmpromotions.co.uk and also at all good booksellers, including Amazon and WH Smith.
The e book is available now for download from Amazon Kindle, Apple Books app and Google Books app.
The book tells a life story almost certainly unparalleled in modern times, describing his journey from childhood in Hull to the present:
“THE UPS AND DOWNS, THE TRIUMPHS AND TRAGEDIES, JOE LONGTHORNE DOESN'T HOLD ANYTHING BACK. In the golden days of Joe's career, he was one of television's highest paid performers, attracting audiences of over 12 million courtesy of his amazing voice and impressions of singers such as Shirley Bassey, Tom Jones and Frank Sinatra. He has countless gold and platinum albums to his name, has appeared on the Royal Variety Show and sells out iconic venues the world over, including the Palladium, Royal Albert Hall, Sydney Opera House and Drury Lane Chicago.However, tragedy and trauma have haunted the Hull-born singer and he tells his life story in his own words in this wonderful book. From his childhood in the travelling community and singing on the streets for money to the colourful rock and roll lifestyle of sex, drugs, bankruptcy, court appearances and the bizarre, hilarious stories which worldwide touring produces.But Joe's toughest times have been found in his repeated battles with cancer, having fought off the illness multiple times over the last three decades, most recently in the summer of 2014 when Joe beat mouth cancer - and began singing again hours after his life-saving operation! This is the true story of one of Britain's most iconic entertainers, a man who has never flinched from doing what he was born for - performing. In a book for which critics and fans have been united in praise, Joe Longthorne lays bare his incredible life in this, his official autobiography.'JOE LONGTHORNE HAS A VOICE IN A MILLION' - TONY BENNETT'HE IS JUST THE BEST, HE CAN DO ME BETTER THAN I DO MYSELF' - DAME SHIRLEY BASSEY”