‘A NIGHT TO REMEMBER’ THE JOE LONGTHORNE SONGBOOK TOUR 2020

5th March 2020
We are delighted to announce that Andrew Lancel is to take over ‘The Joe Longthorne Songbook Tour’ from Darren Day. Starting off in l...

‘A NIGHT TO REMEMBER’ THE JOE LONGTHORNE SONGBOOK TOUR 2020 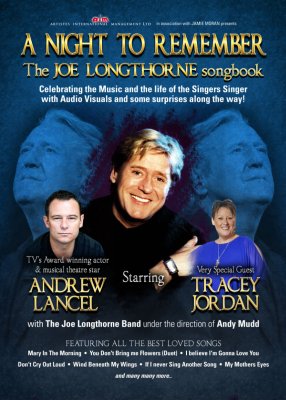 We are delighted to announce that Andrew Lancel is to take over ‘The Joe Longthorne Songbook Tour’ from Darren Day.

Starting off in local theatre and as a cabaret singer, Andrew has become well established as a theatre and television actor including appearances in productions by Bill Kenwright, Peter Gill & Russell T. Davies and is currently starring in 'The Sound Of Music' until April 2020.

Andrew is most famous for his TV acting roles as DC Neil Manson’ in The Bill and Frank Foster in Coronation Street. His impressive CV also includes Dr Andrew Collin in Cardiac Arrest, Brian Epstein in the stage play ‘Epstein – The Man Who Made The Beatles’, Brian Epstein in ‘Cilla The Musical’ and Captain Von Trapp in ‘The Sound Of Music’. He’s also appeared in the film "Wide-Eyed and Legless" with Julie Walters and Jim Broadbent.

Andrew is an accomplished singer of many years having performed his own one-man show and has sung in venues including the Sands in Blackpool and the Royal Albert Hall in London.

A good friend of Joe and Jamie for many years, Andrew is now honoured and excited about this new venture and looking forward to the nationwide tour. Full tour dates and booking details can be found in the Events section.