24th January 2022
We are deeply sorry to share the very sad news that Mr Tony Jo, a dear and long time close friend of Joe and Jamie’s , passed away last n... 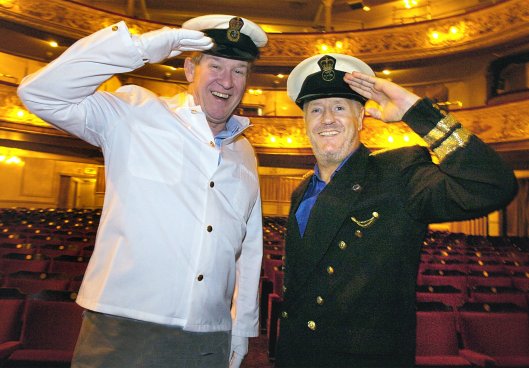 We are deeply sorry to share the very sad news that Mr Tony Jo, a dear and long time close friend of Joe and Jamie’s , passed away last night, following a long fight against cancer.

Tony was a huge giant in the Blackpool Entertainment Industry for so many years and , at the head of his HRH Entertainments , promoted and produced countless ‘sell out’ Blackpool summer shows, including many starring Joe.

Tony was regarded by Joe and Jamie as amongst their closest friends, giving his unending support and help to Joe and Jamie in times of trouble and Joe’s lengthy battles with cancer.

The very deepest of condolences and sympathies are expressed to Helen and Tony’s family at this sad time. 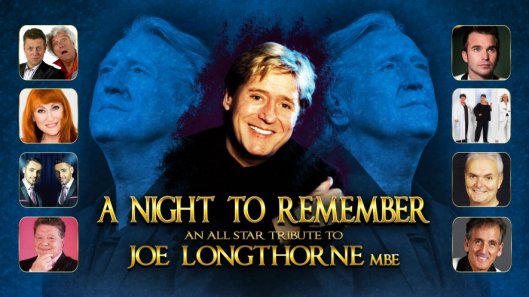 The Glasgow Pavilion Theatre are pleased to bring this all-star tribute to Joe to the Pavilion Theatre Glasgow to pay tribute to his life and career by the people who knew, worked and starred with Joe in many TV and Theatre shows all over the UK. Joe liked nothing more than coming to perform to the people of Glasgow as he thought they were the best in the UK.

This will truly be a night to remember.

Full details of the show and booking links in the Events page on this website.

Celebrating Joe's life and career in his home town, this is going to be a great night as well as an emotional night. 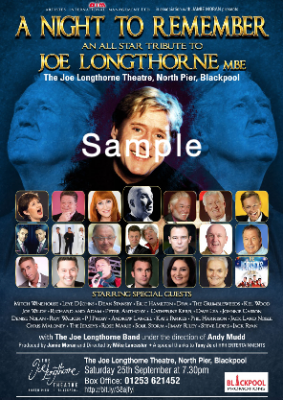 We are pleased to share the ordering link for the brochure for Joe's All Star Tribute Evening HERE. Alternatively just click the STORE option at the top of the page.

The link is live now, free standard p & p on UK orders and also options for worldwide delivery.
First batch of orders will be posted out by next Monday 4 October 2021 with following orders all posted out nextday.
There is a limited quantity of stock available. All enquiries to vip@joelongthornembe.co.uk. 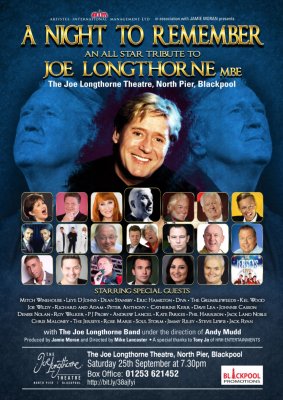 The 'All Star' Gala Tribute Evening for Joe Longthorne MBE is to finally go ahead this Saturday 25 September 2021 at The Joe Longthorne Theatre North Pier Blackpool.

Originally planned for 31st May 2020 and then extensively delayed due to the Covid 19 emergency. All existing tickets are valid for this date.

Tickets are available online here https://www.ticketsource.co.uk/blackpoolpiers/joe-longthorne-mbe-all-star-tribute-evening/e-goeqov and at The North Pier Box Office at the weekend. 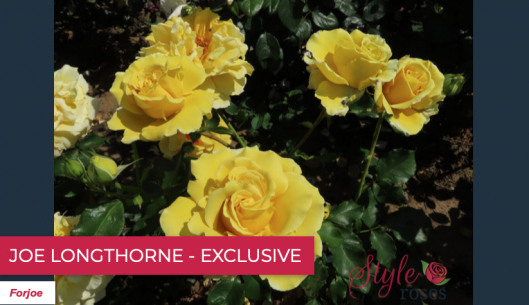 We are delighted to say that from today 'The Joe Longthorne MBE Rose' is now available to pre-order as a newly potted rose for delivery in late November/December, when they will be ready to send out. Please also note these will be freshly potted, dormant roses, no leaves or flowers until 2022 & will need to stay in the pots provided until Summer 2022
May we ask that no other roses are ordered on the same order as Joe's rose as this may cause admin problems for the growers, this is a one off pre order offer for all Joe's fans and friends to have one of these beautiful new roses.
Orders can be placed here JOEROSE

'SAY IT WITH FLOWERS' REMEMBERING JOE ON HIS BIRTHDAY 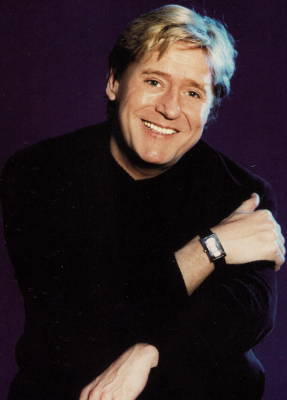 Joe was lovingly remembered and celebrated on what would have been his 66th birthday last Monday 31 May 2021.

On the hottest and sunniest day of the year so far, fans and friends flocked to Blackpool from near and far to show their love and appreciation for Joe, who was always warmly referred to by them as 'Our Joe'.

Joe's grave at the town's Layton Cemetery is now covered with the most beautiful 'carpet' of bouquets and plants, in the words of a song Joe made his own :-

Joe's Museum at the Joe Longthorne Theatre North Pier Blackpool was also busy with many fans making their first visit following easing of the Covid 19 restrictions. Thanks to everyone who took the time to remember Joe either in Blackpool or at their own special place.
In Joe's own famous words 'Memories Live Longer Than Dreams' 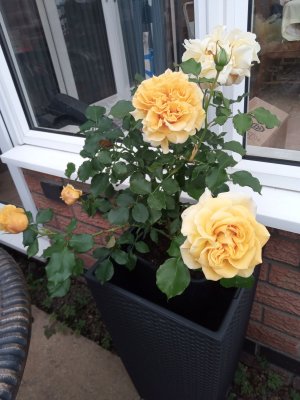 We hope that everyone who was successful in obtaining one of the first batch of the beautiful new 'Joe Longthorne MBE' roses has now received their rose from the growers, Styles Roses. This first release of roses timed to mark Joe's birthday on 31 May.

This first batch was very limited as is the case in all new varieties of plants and shrubs. However a much bigger batch will be ready for Autumn 2021.

Here is the link to Joe's rose https://www.styleroses.co.uk/buy-plants/joe-longthorne-hybrid-tea-rose please take note that this link is not live right now and is marked 'sold out' , Styles Roses will take it live for pre orders from next month July 2021

'THE JOE LONGTHORNE MBE ROSE - HOW TO ORDER' 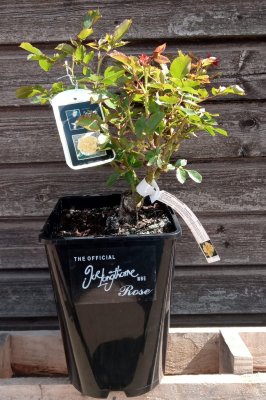 The very first batch of the Joe Longthorne MBE rose will be released this Friday 28 May 2021, in advance of Joe's birthday on Monday 31 May 2021.

Please take note of the following ordering information and please note that the online order link and telephone hotline will not be open until 9am on Friday 28 May, please do not call before 9am on Friday.

The first batch is limited so it will be one per customer 'first come first served'. The telephone order line is STYLES ROSES T:01406 424089 or online link
https://www.styleroses.co.uk/buy-plants/joe-longthorne-hybrid-tea-rose

It is not possible to accept any International orders due to current UK customs arrangements following Brexit. UK and Northern Ireland addresses only at the moment.

Hope all are successful who wish to buy Joe's new rose but if not there will be a larger stock of roses available this autumn. Thanks to Phil and Rachael Harrison for their extensive work on the rose. 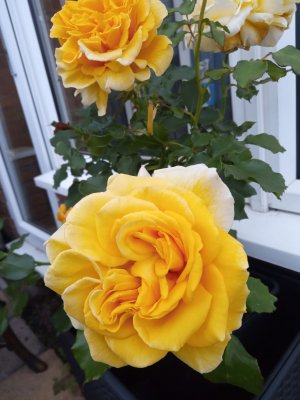 We are delighted to announce the launch date of Friday 28 May 2021 for the ‘Joe Longthorne MBE Rose’.

This new stock has been carefully developed over the past 18 months by Style Roses Nursery , in conjunction with Phil and Rachael Harrison. Creating a new variety of rose stock is always a complicated and delicate process, as all gardeners will know, it has taken some time but the result is a new beautiful delicately yellow shaded bloomed rose , named in loving memory of Joe.

The ordering process will be straightforward, the online order link and telephone ordering line number will be published a few days before the launch day of Friday 28 May 2021, they will both be open at the same time and orders will be on a first come first served basis, the price will be £39.95, inc postage and robust packaging.

This first batch is very limited, a further much larger stock of roses will be available this Autumn and we will post details on how to order or reserve some of this batch of roses as we go forward.

Should you have any enquiries on the rose please email vip@joelongthornembe.co.uk, thank you.

RICHARD AND ADAM TO PERFORM ON JOE’S GALA TRIBUTE EVENING

We are very pleased to announce that Richard and Adam are to perform at Joe’s Gala Tribute Evening on Saturday 25 September 2021 at The Joe Longthorne Theatre , North Pier Blackpool.

Richard and Adam will perform their own special tribute to Joe who played a big part in their early career and constantly encouraged them. Joe first met the brothers at The Greenroom Liverpool when they opened the show around 2010 and they performed for Joe many times after then.

Tickets for this special event are now limited and on sale at https://www.ticketsource.co.uk/blackpoolpiers/joe-longthorne-mbe-all-star-tribute-evening/e-goeqov

Due to the current Government lockdown restrictions , Joe’s ‘All Star Gala Tribute Evening’ at The Joe Longthorne Theatre North Pier Blackpool is be moved from Easter Sunday 4 April to Saturday 25 September 2021.

The ‘star studded’ gala evening was originally scheduled for what would have been Joe’s 65th birthday last year 31 May 2020 and then, due to the Covid 19 emergency last March 2020, was postponed to Easter.

Due to the current Government lockdown restrictions , Joe’s ‘All Star Gala Tribute Evening’ at The Joe Longthorne Theatre North Pier Blackpool is be moved from Easter Sunday 4 April to a new date later on in 2021.

The ‘star studded’ gala evening was originally scheduled for what would have been Joe’s 65th birthday last year 31 May 2020 and then, due to the Covid 19 emergency last March 2020, was postponed to Easter.

We are please to say the new date will be announced this Monday 8 March 2021 with all tickets being valid for the new date.

Currently the North Pier Management are looking at a new date for this Gala All Star Tribute Evening to commemorate Joe's life and career and an announcement will be made asap.

THE GREATEST HULLENSIAN: JOE LONGTHORNE DESERVES TITLE FOR PUTTING HULL ON THE MAP 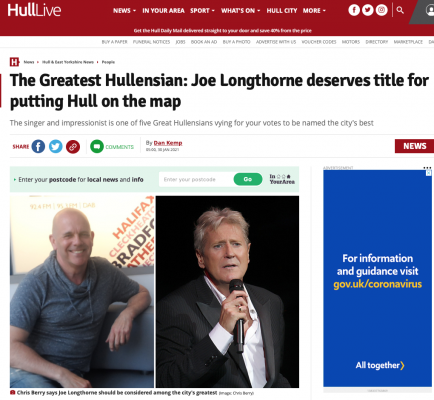 The singer and impressionist is one of five Great Hullensians vying for your votes to be named the city's best
Presenting your very own primetime ITV show to an audience of 15 million adoring fans - not many people from Hull, or anywhere for that matter, have managed that.
But that was Joe Longthorne - a man who "typified everything that is great about our city".
Known to all he came into contact with as simply "Our Joe", the singer and impressionist was regarded by many as a national treasure for a career that not only saw fame on stage and screen but even included three platinum-selling albums.
He appeared on the Royal Variety Performance and listed sell-out shows at the Royal Albert Hall, Drury Lane Theatre in Chicago and Sydney Opera House among a host of huge achievements on his résumé.
A young Bradley Walsh even toured as Joe's support act during his early career before going on to find his own fame.

"Joe Longthorne is probably the greatest entertainer our city has ever produced," Chris said.

"His singing voice soared, his impressions were internationally-renowned and his humour had audiences roaring. I first met Joe when writing about his 40 years in showbiz and I went on to write his autobiography, two further updates and toured with him as his support act all around the UK for several years.

"Known as ‘Our Joe’ by everyone who came into contact with him, Joe radiated warmth wherever he went and had that special Hull quality, always able to talk with anyone.

"He never had any airs and graces and had that uncanny ability to be able to see into someone’s eyes and understand them.

"The Joe Longthorne Show ran for four years on ITV attracting 15 million viewers every week from 1988-1991. He appeared on the Royal Variety Performance, at the London Palladium many times and had sell-out shows at the Royal Albert Hall, Drury Lane Theatre in Chicago and Sydney Opera House. He had three platinum-selling albums.

"Bradley Walsh recently said, when asked who was the best all-round entertainer it had to be Joe Longthorne. Brad had been Joe’s support act in the early part of his career.
Joe battled back many times through leukaemia, cancer, a bone marrow transplant that nearly saw him at death’s door, near bankruptcy and a nervous breakdown to continually tour and entertain his army of followers. In my view he deserved even greater recognition.
When he passed away, sadly taken by cancer in August 2019 and still playing sell-out shows up until two weeks before, his passing meant as much to me as that of John Lennon.

"I’m a Hull lad born and bred, and a Hull KR man too, as well as Hull City. Clive Sullivan is a fantastic man for Greatest Hullensian of All time; William Wilberforce has to be there for his historic achievements too; but Joe, for me, really typified everything that is great about our city – he was warm, friendly, never lost his love of where he came from and truly had a fantastic talent. I lost a friend and a man I loved when he departed, a man who is as deserving of a ‘Joe Longthorne Lane or Way’ as much as Clive and William
(Hull Daily Mail 30 Jan 2021)