5th March 2021
Due to the current Government lockdown restrictions , Joe’s ‘All Star Gala Tribute Evening’ at The Joe Longthorne Theatre North Pier B...

26th February 2021
Currently the North Pier Management are looking at a new date for this Gala All Star Tribute Evening to commemorate Joe's life and career a...

THE FIVE GREATEST HULLENSIANS OF ALL TIME REVEALED ! 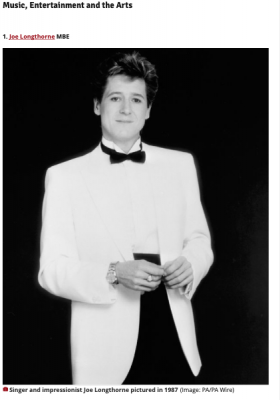 The five category winners have been announced and will soon enter one final poll with the aim of winning the Hullensian crownHull is truly a city of legends.

Since Christmas, the people of the city and the East Riding have been running the rule over 47 of Hull's finest with the aim of crowning the Greatest Hullensian of All Time.

Across five categories, Hull Live received a huge amount of votes with readers eager to recognise favourite sons and daughters.

While crowning the one winner must return to the hands of the public, we can now reveal the five category victors who will go forward into the grand final - as well as those who ranked highly but just missed out.

Evidence of just how great our contenders were includes the fact that a world boxing champion, a former Prime Minister and a man awarded the Victoria Cross didn't make it into the top three of their respective categories - it is an amazing city indeed.

Votes closed at 12pm on Friday, three weeks after the first poll was launched on Christmas Day, and in the coming weeks, the five category winners will be advocated by experts before the final decision returns to the people.

The first poll was launched on Christmas Day with the following four uploaded over subsequent days over the festive period.
The polls closed at 12pm on Friday, January 15.

In the coming weeks we will be shining a light on the 5 winners of each class -
Clive Sullivan MBE
William Wilberforce
Joe Longthorne MBE
Lillian Bilocca
Paul Heaton
before you can pick one as your Greatest Hullensian of All Time.
(Article from Hull Daily Mail )